Liz Cheney is dropping out of the U.S. Senate primary in Wyoming to unseat Mike Enzi, CNN reports: 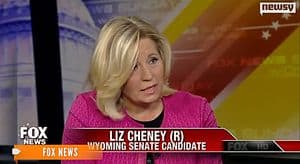 "Serious health issues have recently arisen in our family, and under the circumstances, I have decided to discontinue my campaign," she said. Cheney, the eldest daughter of former Vice President Dick Cheney, began telling associates of her decision over the weekend, CNN reported late Sunday night.

"Though this campaign stops today, my commitment to keep fighting with you and your families for the fundamental values that have made this nation and Wyoming great will never stop," she added.

Enzi was a low-key presence in Washington who was elected in 1996 and, with few blemishes, amassed a conservative voting record in the Senate. He expressed public annoyance at Cheney's decision to mount a primary challenge. A number of his Senate colleagues quickly rallied to his side and pledged support for his re-election bid.

As you may recall, Cheney's bid caused a public family spat to break out over her positions on LGBT rights:

Mary, over the issue of same-sex marriage. Mary Cheney, who is a lesbian, took to Facebook in November to object to Liz's opposition to same-sex marriage, claiming that her sister has previously supported her relationship while saying something very different on the campaign trail. The dispute prompted their parents to weigh in, saying they were "pained" to see the sisters battle over a private matter in full view of the news media.