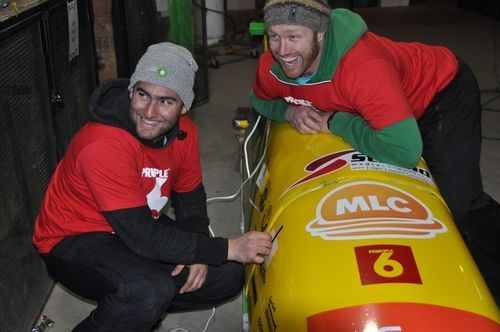 As a show of solidarity with Russia’s LGBT community, both the Australian Men’s and Women’s bobsled teams have announced partnership with Principle 6, the protest campaign that uses the International Olympic Committee’s own charter language to push for LGBT non-discrimination. Buzzfeed reports:

Starting this week, the Principle 6 Campaign becomes an official sponsor for the men’s team with its logo appearing on its bobsled at the World Cup event in Lake Placid, New York.

“We don’t just believe that on principle – some of our most loyal supporters have been gay,” Heath said. “They’ve supported us, so it would be hypocritical of us not to support them. All of us bobsledders are the biggest, the strongest, the fastest athletes in the Winter Olympics. And there’s two or four of us jammed into a sled. If we can support gay rights, why can’t everybody else? We’re proud to have the Principle 6 badge on our sleds.”

The campaign already has the backing of over 40 Olympic athletes, including out snowboarder Belle Brockhoff, runner Nick Symmonds and tennis star Andy Roddick.