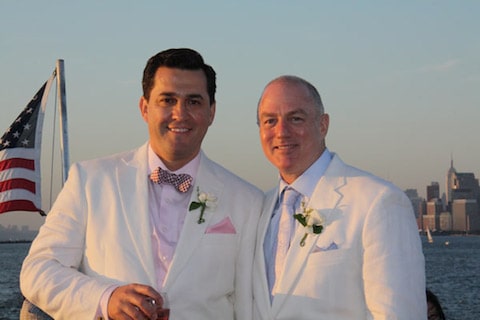 The security theater organization that is the TSA has made some changes to their screening processes and will now recognize same-sex couples and screen them together in the same way that opposite-sex couples are, the Washington Blade reports.

The change was prompted by a recent trio of incidents involving American Airlines personnel separating partners during security screenings and check-ins at the airport, most recently César Zapata and Hunter Carter, pictured above, as they attempted to fly out of Medellin in Colombia.

An American Airlines representative said of one of the incidents that the employee “followed existing security screening rules mandated by the [TSA]." Tomás Georgi, one of the victims in a different incident, said American Airlines Director of Customer Relations Tim Rhodes “dismissed my complaints as the fault of TSA and took no responsibility.” TSA has now taken that excuse away from any airline with their new screening procedures. Of course all of these problems would be avoided altogether if the TSA were abolished given that it serves no functional purpose in terms of enhancing security, but until that day gay couples will be entitled to equal indignities as those of their heterosexual counterparts.