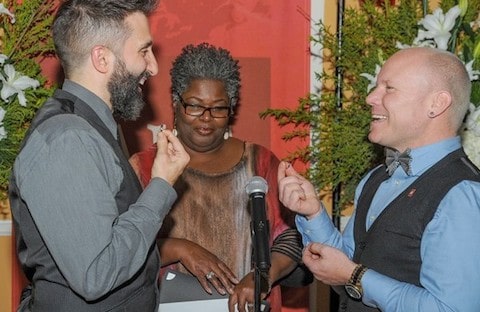 On New Year's Day Aubrey Loots and Danny Leclair made an historic moment by being the first gay couple to wed atop a float in the Tournament of Roses Parade. Spectators cheered, providing a mass affirmation for the couple, but not everyone present shared the crowd's enthusiasm and support.

Specifically, several TV stations filming the parade cut away from the float, and they weren't small stations either. NBC, ABC, and HGTV all cut away, while radio station KLTA went to silence during the AHF float, but allegedly "effused" over the eHarmony float.

None of the offenders have offered up any explanation as to why they cut away, but feel free to contact NBC, ABC, HGTV, and KLTA via Twitter to inquire why they did what they did.