The Navajo Nation may soon see a review of its tribal ban on gay marriage, spurred on by the Coalition for Navajo Equality. The original legislation, which banned same-sex marriages in 2005, likely passed in part because of the climate of the federal government at the time, and limited state support for same-sex couples; now, many Navajo people would like to see that law overturned, following in the footsteps of the Cheyenne and Arapaho tribes of Oklahoma. 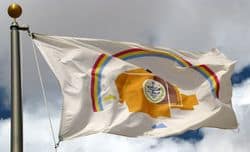 Alray Nelson, founder of the Coalition for Navajo Equality, says he wants the Navajo Nation (flag at right) to respect same-sex relationships, just like two of the states that surround its territory — New Mexico, where gay marriage was legalized this month, and Utah, where it was recently ruled legal but faces a mounting appeal.

“There’s no organized faction against this, like in the fight (for) Proposition 8 in California,” said Nelson, 27, whose organization is seeking to make tribal legislators review a 2005 tribal ban on gay marriage early next year.

Opposition to the review may not be organized, but it exists.

Tome referred to a traditional phrase in the Navajo language that “means that ‘a man and woman come together.’ That's our core belief as Navajo people … I’ve never heard of a man and man.” 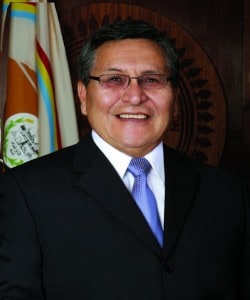 President Shelly (right), it turns out, both agreed and disagreed with Tome's interpretation. While the tradition has been marriage between one man and one woman, Shelly stated that his personal belief is one of equal opportunity for marriage, gay or straight. Other tribal nations agree and fear that state and federal influences (such as George W. Bush's 2004 defense of DOMA) have caused dissent within their tribes.

In October two gay men became the third same-sex couple to be officially married by the Cheyenne and Arapaho Tribes. Their territory is surrounded by Oklahoma, where gay marriage remains illegal and faces much opposition.

After their marriage, a high-level official called a tribal meeting to discuss measures to block such unions, said Cheyenne and Arapaho Lt. Gov. Amber Bighorse-Suitor.

“I was surprised when this broke that there was any opposition in the tribe. The attitude in Oklahoma seems to have infiltrated some of our tribal attitudes,” she said.

Hopefully the Navajo Nation will review the 2005 ban and decide, like the other tribal governments, to allow same-sex marriage. Good luck to the Coalition for Navajo Equality!