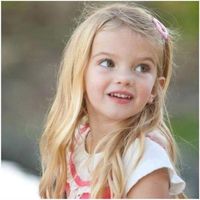 According to police docs obtained by TMZ … Mia Talerico began receiving threatening messages last month on her Instagram — including one reading, "Die Mia, F**king Die in hell! Kill yourself, you deserve to die."

The suspect then sent a picture of Mia's head with a bloody fist covering it … with this message, "Yes, kill you stupid bitch."

In an episode last month, Good Luck Charlie became the first Disney Channel show to feature an openly gay couple. It is still unknown, however, if the threats are linked in any way to that episode's airing.