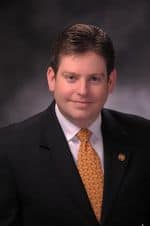 Now, Marshall, along with seven other Republican lawmakers, has filed to impeach Nixon.

Marshall's legislative assistant, Beth Peters, told Daily RFT that his objection is about violating the Missouri constitution, which forbids gay marriage, not about targeting LGBT couples.

"If Missouri were a state that allowed gay marriage, we wouldn't be having this conversation. But it's not," says Beth Peters, Marshall's legislative assistant. "It has nothing to do with what people want to do in their personal lives."

Previous Post: « 14-Minute ‘Game of Thrones’ Teaser Promises More Climaxes Than Ever in Season 4: VIDEO
Next Post: Here’s What it’s Like to Wake Up Next to Shirtless Joe Manganiello: PHOTO »