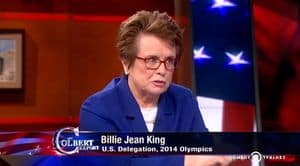 Tennis legend Billie Jean King, who was unable to attend the Sochi Opening Ceremonies with the U.S. delegation because of her ailing mother, who died this week at 91, will join Bonnie Blair and Eric Heiden as part of the Closing Ceremonies U.S. delegation, the AP reports:

King called it a “privilege” to attend.

“I will use this trip to honor the memory of my mother and to further my mission of equality,” King said in a statement to The Associated Press. “I am thankful to President Obama for including me and I look forward to supporting the men and women of Team USA in Sochi.”