A federal appeals court has granted the Nevada Governor and Attorney General's request to withdraw a brief defending the state's ban on gay marriage and granted an expedited hearing in the case, Lambda Legal reports: 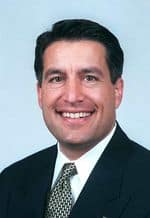 The fact that the government defendants no longer are defending Nevada's exclusion of same-sex couples from marriage makes any delay in these loving and committed couples securing the relief they seek particularly intolerable. The wheels of justice are now on a much faster track.

Gov. Sandoval's request and the earlier decision by Carson City Clerk-Recorder Alan Glover to withdraw his brief were motivated by the Ninth Circuit's recent ruling in SmithKline Beecham v. Abbott Laboratories that discriminatory classifications based upon sexual orientation must receive heightened scrutiny and should be presumed unconstitutional. The heightened scrutiny standard is much tougher to meet and rendered the state of Nevada's arguments in its original brief defending the marriage ban "no longer tenable in the Ninth Circuit," as Nevada's Attorney General conceded in a statement released last week. The withdrawal of the two government defendants leaves only the Coalition for the Protection of Marriage, which the U.S. District Court had allowed to intervene, defending the marriage ban.