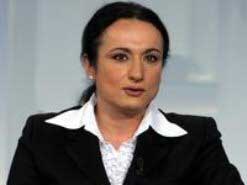 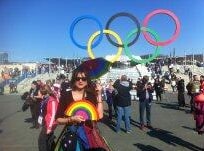 Vladimir Luxuria, the former Italian MP and the first transgender person to hold that office, has been arrested in Sochi after displaying a banner reading 'Gay is OK', according to Italian media reports.

Luxuria was taken into custody, according to Italian LGBT activist Irma Battaglia of the 'Gay Project', and the attitude of the agents has been "brutal and aggressive".

Luxuria tweeted a photo earlier in the day as she held a rainbow fan. She wrote: "I'm in Sochi! Greetings with the colors of the rainbow, in the face of Putin!"

UPDATE: Luxuria was released in the early hours of Monday, Reuters reports:

Luxuria said she had been protesting against a law signed by President Vladimir Putin last year banning the spread of "gay propaganda" among minors. Critics say it discriminates against gays and that it has fuelled violence against homosexuals.

"I think it is important …(to have) the opportunity to talk internationally about these things because otherwise these things happen in Russia and nobody knows, nobody cares," Luxuria said after stepping off the stage at a gay cabaret bar in Sochi.

She said she had been treated with respect while in detention but was told by the police that she could not promote pro-gay slogans in public.

The police declined immediate comment and the Russian organizers of the Games said the police had no formal record of her detention. International Olympic Committee spokesman Mark Adams said: "We hope that the Games will not be used as a platform for demonstrations."

Note: Reports use differing pronouns when referring to Luxuria, who has stated in the past that she does not consider herself male nor female. The Italian foreign minister uses the pronoun 'she' which we will use here as it appears to be the predominant mode of identification in varying reports.