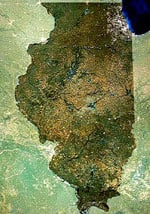 A federal judge in Chicago ruled on Friday that gay couples do not have to wait until June to marry in Cook County, the Chicago Tribune reports:

"There is no reason to delay further when no opposition has been presented to this Court and committed gay and lesbian couples have already suffered from the denial of their fundamental right to marry,” U.S. District Judge Sharon Johnson Coleman stated.

Her ruling noted that Cook County Clerk David Orr filed a brief in support of the lawsuit, which argued that couples should not have to wait until the Illinois law went into effect on June 1.

Orr released a statement after the ruling saying he will begin issuing same-sex marriage licenses "immediately."

The downtown Bureau of Vital Records, in the lower level of the Daley Center, will be open an extra two hours tonight until 7 p.m.for gay couples who want to get marriage licenses after work.