Austrian veteran ski jumper Daniela Iraschko-Stolz, who we neglected to include in the talley of openly gay Olympians we published last week, says she won't make any public protest of Russia's anti-gay laws, NZ Newswire reports: 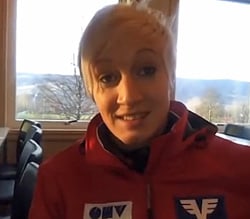 The openly gay athlete, who got married last autumn, dominated the women's second training on the normal hill, showing she was ready to grab a historic first Olympic gold.

"I don't think it's a good idea to make protests here, no one cares," said the 30-year-old, who added her partner's name — Stolz — to hers upon marriage.

"To jump pretty good is also a statement."

"I'm together with my partner now and don't have any problems, not in Russia or with the Austrian federation. Ten years ago it was different," she recalled.

"I know Russia will go and make the right steps in the future and we should give them time."