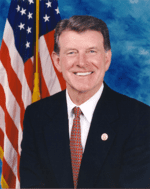 The Moscow-Pullman Daily News reports that the committee endorsed a request by Gov. C.L. "Butch" Otter (pictured) to transfer the money from the general fund to the Constitutional Defense Fund in anticipation of a legal fight.

If there is a trial at all.

Earlier this month, four couples who filed suit in Idaho in November requested that the federal judge overseeing the lawsuit strike down the ban without a trial, saying the overwhelming rulings in other parts of the country make it clear that Idaho's ban violates the Constitution.

What a waste. To think the state could actually be making money with marriage equality. Taxpayers should be outraged.