A historic decision in 2009 legalized gay sex in India for a few short years. Last year's stunning ruling by the Supreme Court of India once again made gay sex illegal in that country. The law, which is part of section 377 of the Indian penal code, was introduced way back in 1861.

The Independent takes a look at how the reinstatement of the law has affected gays in India: 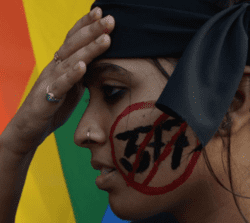 …many young people had taken the decision to come out in the aftermath of the 2009 decision by the Delhi High Court. Now they found themselves criminalised.

Campaigners believe the decision will put up to 75m Indians at right of harassment. The threat of discrimination and harassment is particularly high in the country’s more conservative smaller towns and villages.

They also believe its significance reaches beyond India. Following the decision, both Uganda and Nigeria signed into law harsh anti-gay legislation and campaigners believe the move was influenced by the decision of the Indian court.

Activists will file a fresh “curative” appeal to the Supreme Court. Yet they are not optimistic of success. “I think we have a good case but we have bad judges,” said Anand Grover of the Delhi-based Lawyers Collective, one of those who has been leading the legal fight.

"Let them do whatever, but in their homes," says Champak Rai, general secretary of right-wing group Vishwa Hindu Parishad. "But if they do it in public, we will beat them up. After all, alcohol and smoking is banned in public. There are limitations to fundamental rights."

The December ruling has apparently bolstered gay rights activists. From the piece in the The Independent:

Campaigners in India insist they will not deterred. Ms Esteves, who had been present for the historic judgement in 2009, said the day after the supreme court judgment she and others had been filled by new determination.

“[We decided] we would keep raising our voices across the length of India, that we would raise them together and so loud that not even the supreme court would be able to claim that they can’t hear us,” she said.

And in Hyderabad, activists will on Sunday march in the city’s second gay pride event. One of the organisers, Sai Tejo, a 19-year-old sociology student, said he believed people would make a special effort to support the event in the aftermath of the Supreme Court ruling. “One thing the judgement did was to bring the topic out into the open and put it on the agenda of ordinary people,” he said. “One thing’s for sure, no-one is going back in the closet. It means people will fight it out.”