Dozens have been detained across Russia in efforts to silence protests ahead of the Sochi Games, the NYT reports: 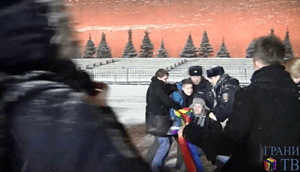 From St. Petersburg to the Caucasus, the authorities detained at least 61 people on Friday for holding unauthorized protests ahead of the opening ceremony of the Winter Olympics in Sochi. The detentions underscored the government’s efforts to stifle protests even far away from the Games.

This includes, as we noted earlier, 10 LGBT activists in Moscow (the NYT puts that up to 19), and 4 in St. Petersburg.

Buzzfeed reports that those arrested in Moscow were beaten in the police station, and relayed these text messages to Buzzfeed's J Lester Feder:

Text message from me: We didn’t sign anything. Are you all still there?

From them: Yes, in cage. They beated [sic] two of us

Me: oh no, who? What can we do? Can you keep reporting? Are all of you in the same cage?

Them: Yes we are together. Now we are singing

New text from them: They beated [sic] our people again – cause we asked to let our public defender come to us. They didnt give us any docs