The American Family Association, Family Research Council, and other right-wing organizations will not be enjoying the bounty of Thin Mints, Samoas, and Tagalongs offered by the Girl Scouts of America this year. The reason? According to AFA president Tim Wildmon, "buying Girl Scout cookies serves only to further facilitate a very liberal pro-abortion agenda.”

WND has reported on a variety of activities on the part of Girl Scouts that conservatives and religious believers might find objectionable, including when the organization was found touting a pro-abortion politician.

Girl Scouts also marched in a homosexual promotion in San Francisco and were found to be removing “God” from their “Girl Scout Promise.”

In a lesson called “Amaze: The Twists and Turns of Getting Along,” girls were taught that they should read Buddha and explore mazes and stone or dirt labyrinths – symbols rooted in pagan mythology and popular within the New Age movement as meditation tools. 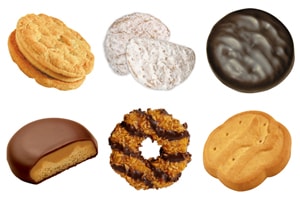 Perhaps most disturbing, and ironic, is the ardent opposition Girl Scouts face from Concerned Women for America.

These complaints smack of earlier concerns from the likes of Indiana Rep. Bob Morris and transphobic girl scout Taylor.

WorldNetDaily actually offered a plethora of extremely silly reasons not to buy the delicious treats; I suppose that means more for the rest of us!