Senate Republicans in Utah killed an LGBT non-discrimination bill on Wednesday afternoon that would have prohibited housing and employment bias against gays and lesbians, the Salt Lake Tribune reports: 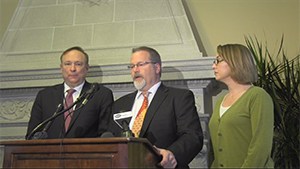 Votes in the GOP caucus are supposed to be secret, but sources confirmed that [Sen. Steve Urquhart, R-St. George] was the only vote in favor of hearing the bill this session. Urquhart said Wednesday he didn’t ask leadership to take the vote.

The bill had "broad public backing" according to the paper.

Previous Post: « Pat Robertson Knocks Creationist Ken Ham for ‘Making a Joke of Himself’ at Debate: VIDEO
Next Post: The Olympic Games Have Always Been a Little Gay: VIDEO »