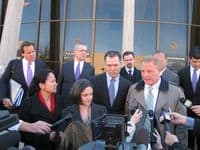 “Counselors have made some excellent arguments on both sides,” Garcia said inside a packed courtroom at the federal courthouse in San Antonio at the conclusion of the hearing.

Outside the courthouse moments later, the two same-sex couples who are plaintiffs in the federal lawsuit challenging the marriage bans — Cleopatra DeLeon and Nicole Dimetman, and Mark Phariss and Victor Holmes — addressed the media.

Garcia said a ruling "will be forthcoming at some time."

John Wright at Lone Star Q plans to have some analysis of the arguments up later.