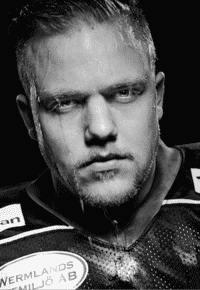 An (American) football player in Sweden, inspired by the coming out of Michael Sam earlier this year, has followed suit with an announcement of his own.

22-year-old Marcus Juhlin made the proclamation in the April issue of the European gay magazine QX.

He's the first American football player in Sweden to come out, and according to the QX team, the reaction from his team mates and from the other teams in the league have been amazing. "They all support and respect him,"QX editor in chief Anders Öhrmantold us. Marcus sent an email to QX in December stating: ”Please help me come out from the closet and close that door once and for all.” And they did. Juhlin lives in the city of Karlstad and is playing for Carlstad Crusaders. Oh, and in case you're curious, he is single.