Despite the fact that the Cathy said in early 2011 that the company "would not champion any political agendas on marriage and family," in that same year the group’s anti-gay giving doubled.

In 2012 after Chick Fil-A executives promised to stop supporting anti-gay organizations, Cathy continued to show his support to anti-gay groups, and later stated that the company had never agreed to end its anti-gay funding at all. 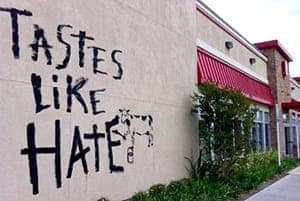 Cathy also remained a vocal opponent of marriage equality. Most infamously in June of 2012, Cathy said the company was guilty as charged in its support of so-called pro-family and pro-marriage (re: anti-gay) organizations. A month later he told the Baptist Press, "We are inviting God's judgment on our nation when we shake our fist at Him and say 'we know better than you as to what constitutes a marriage.’"

After the June 2014 Supreme Court decisions negating Prop 8 and section 3 of the so-called Defense of Marriage Act, Cathy posted and then quickly deleted a tweet that read, "Sad day for our nation; founding fathers would be ashamed of our gen. to abandon wisdom of the ages re: cornerstone of strong societies."

The Atlanta Journal Constitution adds that earlier this month Think Progress reported that:

So Chick Fil-A decreased its anti-gay funding while also decreasing its donations to all other groups. But no word as to whether the chain will still hire and fire employees based on their sinful personal lives.

Previous Post: « Rupert Murdoch: Boycott Guinness for Siding with Gay Groups on St. Patrick’s Day
Next Post: 17-Year-Old Japanese Student Comes Out In Inspiring ‘I Have a Dream, Too’ Speech: VIDEO »