Death is not the end. Or, at least, not until you've died a lot. In the world of author David Edison's debut novel The Waking Engine, when a person dies the "soul" shifts to another world in another reality with memories and personality intact to begin another life anew, again and again. 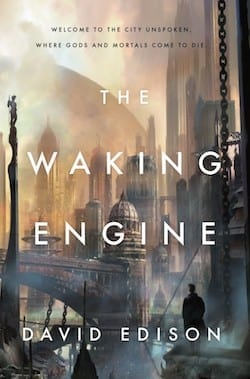 Eventually they shift to a place called 'The City Unspoken' where a lasting 'True Death' – that is, a permant rest and an end to shifting from world to world – can be found for the lucky few who earn it. This was one of the first things that native New Yorker Cooper learned after waking up on the hill of Displacement outside The City Unspoken. However, something has stopped the True Death. What's more, some can't even simply die normally and shift worlds, inexplicibly cursed to a sort of unlife and left stranded in their present world.

Meanwhile, the aristocratic denizens under the sealed Dome within The City Unspoken are suffering from an inverse crisis. Though they are bodybound – when they die they simply regenerate after a short amount of time, neither experiencing True Death nor shifting to another world – someone amongst them has found a weapon capable of administering True Death and is using it to pick them off, one by one, for reasons unknown.

Edison does an excellent job of imparting the confusion of Cooper as he experiences the sheer alien-ness of The City Unspoken and its multi-dimensional denizens onto the reader, and precious little handholding is given to usher the reader from one improbable event to the next, trusting the reader to make sense of it all. And it does start making sense, eventually. Events that at first seem to be scattered and unconnected, a few of which border on non-sequitur, become intricately woven as greater plots are revealed and schemes within schemes come to light.

Because of this, the reader should be prepared to pay attention as The Waking Engine is not a breezy read; by that same token Edison has quite the expanded vocabulary and isn't afraid to use $20 SAT words. 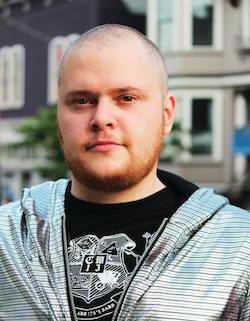 One of the standout features of the book is the treatment of Cooper as an openly-gay character. As a gay man himself, Edison didn't hesitate to make him the main protagonist. There are no subtle hints about his orientation nor is he "coded", Cooper is just flat-out gay, and his sexuality is treated the same way that the sexuality of heterosexual characters usually is: as a part of the character. It is neither Cooper's defining characteristic, nor is it some unimportant incidental like his shoe size. He's simply gay. This is a lesson that so many writers, both in and outside of genre fiction, could take note of when trying to figure out how to write gay characters, and it's encouraging to see one so well-represented.

The Waking Engine isn't without its flaws, however. For such an imaginative world, Cooper takes it all in remarkable stride, and his clueless befuddlement sometimes comes across as a blasé going-with-the-flow. Some of the supporting cast, such as Cooper's two companions Sesstri and Asher, feel very flat at times and would have benefitted from some further fleshing out. Also, despite most events coming together by the end, some of the sequences of events are just a bit too jumbled or obscure and there were a few instances where I felt like I had missed reading some connecting event.

Even with the few flaws, The Waking Engine is garnering favorable reviews, and it's a book I would recommend for anyone who wants to read something with a strong gay protagonist, and whose story and setting break molds and defy conventions. Just be sure to have a thesaurus handy.