In a Facebook post this morning, Ezra Klein, editor-in-chief of Vox.com, responded to the growing anger over his hiring of Brandon Ambrosino. 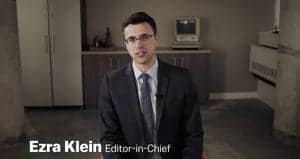 Over the past 48 hours I’ve spoken to a lot folks in the LGBT community to better understand the strong, negative reaction to my hiring of Brandon Ambrosino. People felt Brandon had made his name writing sloppy pieces that were empathetic towards homophobes but relentlessly critical of the gay community. They believe we were sending a signal about Vox’s approach to LGBT issues: Contrarian clickbait at the expense of the struggle and discrimination that LGBT men and women face every day.

That was never our intention. Our approach to LGBT stories will be the same as our approach to all other issues: We want people to read us because we do the best job tracking and explaining the news, not because we do the best job shocking people. We want to inform our readers — not annoy them. Our kind of clickbait tends towards beautiful data visualizations, not frontal assaults on causes we believe in and people we admire.

Brandon isn’t our LGBT correspondent. He’s not even the only LGBT employee of Vox.com. He is a young writer who we think has talent who’s going to receive a lot of editing and a lot of guidance.

Brandon applied for the news-writing fellowship, a one-year position focused on helping inexperienced writers develop aggregation and reportorial skills. Contrary to some garbled reports, before hiring Brandon I read a lot of his previous work. Brandon’s past writing was often quite pointed and personal, and not a fit for Vox — and I told him so. The writing fellowship requires a very different approach.

But something that often happens to young freelance writers on the Internet is that they end up writing reams of their most controversial opinions before they ever get a chance to do basic reporting or benefit from a routine relationship with an editor. So as part of Brandon's writing test, I asked him to do eight news articles and two explainers — more than 5,000 words of original content, in all. He needed more editing, training and direction. But he showed himself a strong, fast writer who really wanted to learn. And that training is what the fellowship is there for.

I could’ve, and should’ve, handled this hire a lot better. But I would ask people to give Brandon a chance. He’ll be held to the same high standards as all Vox.com employees, and I believe he’ll meet them.