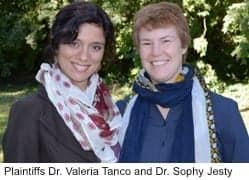 The Attorney General appealed the ruling but now Trauger has denied that request, Buzzfeed reports:

The court finds that all four factors weigh against a stay and in favor of continuing enforcement of the Preliminary Injunction. Even if the court were to accept that there is arguably a “serious question” about the merits of its constitutional analysis, the defendants have not even approached their burden to show “irreparable harm that decidedly outweighs the harm that will be inflicted on others if a stay is granted.”

Trauger's ruling appeals to only the three couples involved in the case.