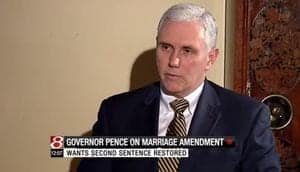 Attorney Daniel Canon said during a media conference Friday that Indiana is now under leadership that says his clients do not deserve the same rights, responsibilities and privileges provided to opposite-sex couples, simple because they are in a same-sex relationships.

Canon said that the U.S. Supreme Court, through United States vs. Windsor, ruled last year that it is unconstitutional to treat homosexual partnerships differently than heterosexual couples.

“We are asking the Indiana federal court to recognize what every other court in the country has recognized [since U.S. vs. Windsor].” Canon said. “At this point, I think, it is fairly clear that the people of Indiana can not depend on the legislature to do what is right thing to protect their civil liberties and their constitutional rights, so we have turned to the federal courts.”

Indiana's law says: “Only a female may marry a male. Only a male may marry a female. A marriage between persons of the same gender is void in Indiana even if the marriage is lawful in the place where it is solemnized.”

The lawsuit targets that statute. Indiana's Attorney General Greg Zoeller said he would defend the law.