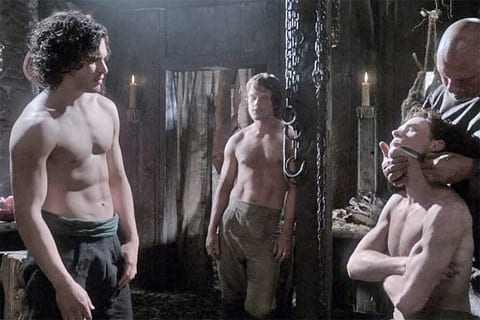 German actress Sibel Kekilli, who plays prostitute Shae, Peter Dinklage’s (a.k.a. Tyrion Lannister’s) love interest on HBO’s Game of Thrones has called upon the show’s creators to inject the show with a bit more of the naked male form, according to The Independent:

When asked whether more of the show's male actors should shed their clothes, she said “ Yes, of course. Why are all the women naked? “I mean good-looking guys. I want to see Conleth Hill and [Nikolaj Coster-Waldau] and Peter Dinklage.”

Speaking during a recent press conference in London, she jokingly added “We’re going to talk to [writers] David Benioff and Dan Weiss.”

Kekilli…is another actress to call for more male nudity on the show, her co-star Carice van Houten has also expressed similar sentiments.

Kekilli and van Houten aren’t the only ones wanting to see more of the men. Vulture’s Matt Zoller Seitz last year called upon the hit fantasy series to focus its gaze more on the male characters' bodies:

I’d like Game of Thrones to enlarge the scope of its fantasy­ — to show more same-sex couplings and male nudity — as Starz’s Spartacus series has done with such panache. For all its tough, complicated women characters, Thrones is rightly perceived as too much of a ­sausagefest. The producers could change that perception by adding more sausage.

As previously reported, actor Finn Jones, who plays Ser Loras Tyrell, a character who’s no stranger to the homosexual tryst, also complained that the show was specifically lacking in the hot gay action department.

You can check out a teaser trailer for the upcoming season HERE.

Previous Post: « What To Watch This Week on TV: ‘Dancing With the Stars’ Returns, ‘Glee’ Hits 100 – VIDEO
Next Post: N.C. School Tells Bullying Victim Not To Wear ‘My Little Pony’ Backpack »