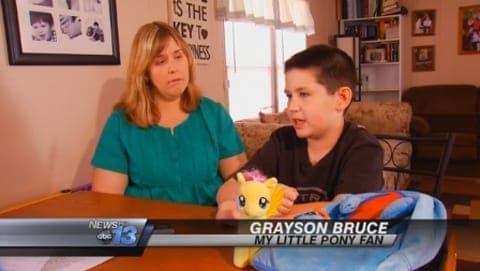 A 9-year-old North Carolina student named Grayson Bruce has been told by his elementary school to stop wearing a “My Little Pony” backpack because it is a “trigger for bullying.”

Bruce told his ABC news affiliate that because bullies associate his Rainbow Dash backpack with a girl’s toy, “[The bullies are] taking it a little too far, with punching me, pushing me down, calling me horrible names, stuff that really shouldn't happen."

The boy’s mother responded, “[My Little Pony is] promoting friendship, there's no bad words, there's no violence, it's hard to find that, even in cartoons now." She added, “Saying a lunchbox is a trigger for bullying, is like saying a short skirt is a trigger for rape. It’s flawed logic, it doesn’t make any sense.”

For now Bruce is using a different bag, but mother and chld are urging the school to take action against the bullies rather than forcing the young student to conform to intimidation.

Another North Carolina student attempted suicide earlier this year after being bullied for watching My Little Pony. Soon after, a recovery fund was raised in his honor. Similarly, over 15,000 people have joined a “Support for Grayson” Facebook page urging his school to stop bullying and “empower children to be who they are!”