In a terrific column over at The Daily Beast, Episcopal Bishop Gene Robinson rips apart the victimization rhetoric of religious conservative who claim providing public services and accommodations to gay people is a violation of their freedom of religion, saying "[it's] time we called out our religious brothers and sisters for misunderstanding their recently-acquired status as members of a shrinking minority as victims." 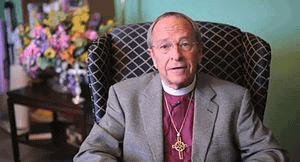 Appeals to the courts are being made for “relief” for this violation of the service providers’ “freedom of religion” and “religious liberty,” claiming that forced compliance with such anti-discrimination laws is a violation of the providers’ free practice of their religion. Indeed, the language used in defiance of these anti-discrimination laws takes on the language of victimization. These providers feel as though they are victims of discrimination themselves based on their religious beliefs.

But I have to ask: are religious conservatives confusing the pain of finding oneself “suddenly” in the minority with actually being a victim? Both feel uncomfortable, even painful, and are fraught with anxiety. But they’re very different.

Here’s what victimization looks like: every day, especially in some places, LGBT people face the real possibility of violence because of their orientation or gender identity. Young people jump off bridges or hang themselves on playground swing sets because of the bullying and discrimination they face. In 29 states, one can be fired from one’s job simply for being gay, with no recourse to the courts. In most places, we cannot legally marry the one we love. Some of us have been kicked out of the house when we come out to our parents, and many young LGBT people find themselves homeless and on the streets because of the attitudes of their religious parents toward their LGBT children. And did I mention the everyday threat of violence?

Robinson goes on to say that “as a society, we would do well to distinguish between real victimization and the also-very-real discouragement felt by those who now find themselves in the minority”

You can read the full column HERE.