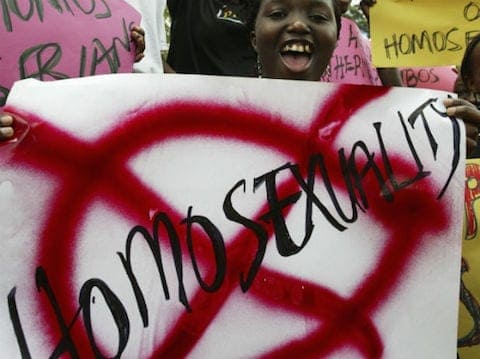 Africa is perhaps the least hospitable continent for homosexuals, which is actually illegal in 37 countries and is subject to widespread taboos, thanks in no small part to the dissemination of lies and stoking of hatred from evil religious evangelical lunatics like Scott "The Nazis were gay" Lively and Martin "Eat da poo-poo" Ssempa.

While Uganda is one of the most hostile, Kenya is not far behind. Since 2010, 595 cases of homosexuality have been investigated, according to MP Aden Duale. In an assembly with other MPs, Duale even said that "gayism" and "lesbianism" are "as serious as terrorism," a level of educated insight that harkens back to the days of Oklahoma representative Sally Kern.

However, Duale responded to calls for tougher laws to penalize homosexuality by saying that the Kenyan constitution and penal code were sufficient, and that the decision to not follow Uganda's methods was in no way influenced by the fact that international donors have suspended aid to Uganda in response to their treatment of homosexuals.