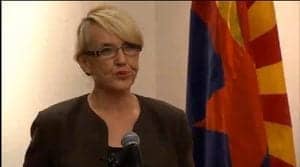 Arizona Gov. Jan Brewer's staff worked with proponents of a bill that would have allowed businesses to refuse service to gays before the legislation was introduced in January, according to emails released by her office. The meetings between Brewer's legal counsel and policy director came as the Center for Arizona Policy tried to make changes to a bill that was vetoed last year to make it more palatable to the governor.

Of course, following outrage from corporate America and the public, Brewer vetoed this bill as well.

Center for Arizona Policy president Cathi Herrod blamed the bill's fate on opponents who misrepresented what it does. "I believe the veto was politics at its worst,' Herrod said Monday, "The veto was of a bill that did not exist and the 1062 opponents were able to make the bill about something it was not."

Wonderful, efficient use of taxpayer money.