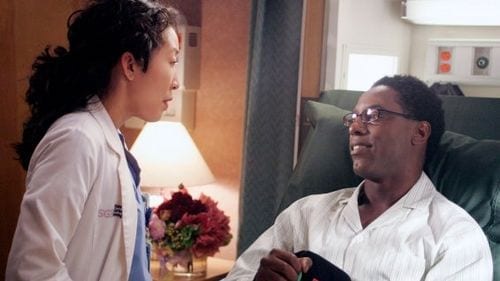 Seven years after he was fired for using a gay slur toward co-star T.R. Knight, Isaiah Washington is returning to Grey's Anatomy, according to The Hollywood Reporter:

Washington will return to guest star for a May episode of the medical drama seven years after he was fired from the series following on-set clashes and anti-gay remarks directed at then-closeted co-star T.R. Knight.

His return to the series comes as Grey's is preparing to say farewell to one of its original and most beloved stars, Sandra Oh, whose Cristina was at one point engaged to marry Washington's character. Oh will exit Grey'sfollowing the end of its current 10th season in May.

Washington was recently cast in The CW's The 100 – his first series regular role since his firing.

Washington recently told HuffPost Live that his life was destroyed by "an agenda" after his anti-gay remarks.

Previous Post: « Probably Best to Ask Before Kissing Your Favorite Footballer: VIDEO
Next Post: The Saddest Version of Pharrell’s ‘Happy’ Ever Recorded: VIDEO »