Analysis: If the United Nations builds on steps it has taken on LGBTI rights in the recent past, it may prove to be an antidote to the increased violence and persecution against LGBTI people around the world. 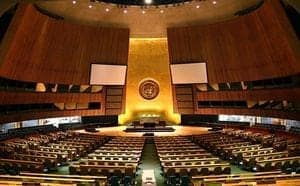 In 2014, one can barely read the news without coming across a story concerning lesbian, gay, bisexual, transgender or intersex (LGBTI) persons. Invariably these stories relate to violence, discrimination or other human rights violations inflicted on individuals because of their sexual orientation or gender identity/expression.

Occasionally, a good news story creeps in, like the recent legalising of marriage for same-sex couples in the United Kingdom, France and New Zealand. But more often than not, the story is about gay bashing in Russia, draconian homophobic laws being enacted in various African countries, or the Indian Supreme Court re-criminalising consensual sexual conduct between men, after the Delhi High Court struck down the relevant provision of the criminal code four years ago.

With 81 states still criminalising homosexuality, the plight of LGBTI persons in many parts of the world is dire.

In light of an apparent increase in the intensity and frequency of LGBTI rights violations, it is appropriate to ask: What is the United Nations doing in response? And what more could it be doing? 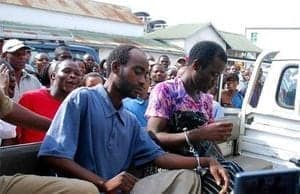 As the body responsible for monitoring state parties’ compliance with the International Covenant on Civil and Political Rights (ICCPR), the Human Rights Committee has an important role to play in promoting and protecting the rights of LGBTI persons.

There are three ways in which it can do this, namely, in its Concluding Observations, in its General Comments and in its Views on individual communications. The degree to which it has succeeded in raising LGBTI rights through these different avenues is variable.

The Human Rights Committee’s approach to raising violations of the rights of LGBTI persons in its Concluding Observations has been patchy. Although it has improved in recent times, there have still been instances where the Human Rights Committee has failed to explicitly address the fact that a state continues to criminalise homosexuality in clear breach of the ICCPR.

In 2014, the Committee will review 18 states. Of those, Sierra Leone, Malawi, Sudan, Burundi and Sri Lanka still criminalise homosexuality.

Of course, many of the states where homosexual conduct is legal also have significant LGBTI rights violations, because, for example, there is no anti-discrimination legislation that protects sexual minorities.

One only has to look at recent events in Russia, where homosexuality was legalised in 1993, to know that decriminalisation is only the start of the journey towards dignity and equality for LGBTI persons, not the end. 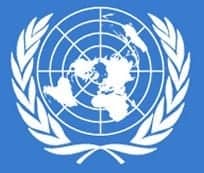 The Human Rights Committee should therefore include recommendations not only about decriminalising homosexuality in its Concluding Observations for these 18 states, but also other reform measures necessary to ensure that LGBTI persons can be free and equal.

The Human Rights Committee has a woeful record when it comes to including LGBTI persons in its General Comments. To date the Committee has published 34 General Comments and not one of them has mentioned LGBTI rights. This is in stark contrast to other treaty committees, which have all made explicit reference to sexual minorities in at least one General Comment.

There may be signs that the Human Rights Committee is ready to catch up. General Comment 35 on Article 9 (liberty and security of person) is currently being drafted and does include a reference to sexual minorities. Let’s hope this language is retained in the final version.

The Human Rights Committee has considered five communications from LGBTI persons and in four of those cases found there had been breaches of the ICCPR. Most recently, it found that Russia’s gay ‘propaganda’ laws are inconsistent with the right to freedom of expression, read in conjunction with the right to freedom from discrimination (Fedotova v Russian Federation, 2012).

Thus, while the Human Rights Committee is making good progress with promoting and protecting the rights of LGBTI persons in its Concluding Observations and Views, there is definite room for improvement in its General Comments. 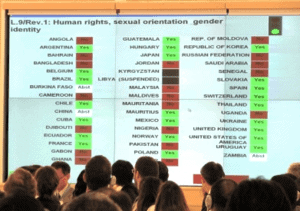 The Human Rights Council is also making a positive contribution to the UN’s efforts to promote and protect the rights of LGBTI persons, most particularly through its landmark resolution on sexual orientation and gender identity in 2011 (SOGI Resolution) and through comments and recommendations made during the Universal Periodic Review Process (UPR).

The SOGI Resolution was the first ever passed by a UN body on LGBTI rights. It is now imperative that the Council build on this success by adopting a follow up resolution further condemning the ongoing discrimination and violence against LGBTI persons, and establishing a mechanism or process to ensure that the Human Rights Council can identify and respond to violations of LGBTI rights in a systematic, coordinated and ongoing manner.

The continuing criminalisation of homosexuality has been raised with a number of states during the UPR and many have accepted recommendations that they repeal these laws, including Mauritius, Nauru and Seychelles. That LGBTI issues are being raised as part of the UPR is pleasing, particularly as 11 of the 47 current members of the Human Rights Council are states where homosexuality is still a crime (Algeria, Botswana, Kenya, Kuwait, Maldives, Morocco, Namibia, Pakistan, Saudi Arabia, Sierra Leone and United Arab Emirates). It is hoped that in 2014, the HRC will consistently raise LGBTI issues within the UPR, whether it be about the criminalisation of homosexuality, the absence of anti-discrimination legislation or violence against sexual minorities.

OFFICE OF THE HIGH COMMISSIONER FOR HUMAN RIGHTS (OHCHR) 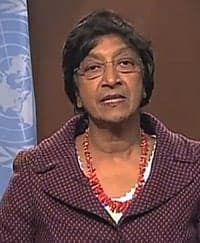 The Free & Equal campaign launched by OHCHR last year is a standout achievement, but by no means does it represent the extent of the Office’s work to promote LGBTI rights. High Commissioner Navi Pillay has been a vocal critic of recent moves to oppress LGBTI people in Africa even further. In relation to new draconian Nigerian anti-gay legislation, she said:

"Rarely have I seen a piece of legislation that in so few paragraphs directly violates so many basic, universal human rights. Rights to privacy and non-discrimination, rights to freedom of expression, association and assembly, rights to freedom from arbitrary arrest and detention: this law undermines all of them."

Another OHCHR achievement is the drafting of the first UN report documenting discriminatory laws and practices and acts of violence against individuals based on their sexual orientation and gender identity. This 2011 report was prepared pursuant to a request by the HRC in the SOGI Resolution.

Finally, in 2012, OHCHR published a very helpful booklet that sets out the core obligations that states have towards LGBTI persons, and describes how various UN mechanisms have applied international human rights law to LGBTI persons.

Fortunately, we can be confident that OHCHR will continue its work to increase respect for the rights of LGBTI persons, because the high commissioner has said as much in her annual report to the General Assembly.

If the Human Rights Committee, Human Rights Council and OHCHR build on some of the important steps they have taken on LGBTI rights in the recent past, it may prove to be an antidote to the increased levels of violence and persecution we are witnessing being inflicted on LGBTI people in many parts of the world.

Dr Paula Gerber is an Associate Professor at Monash University Law School and Deputy Director of the Castan Centre for Human Rights Law.