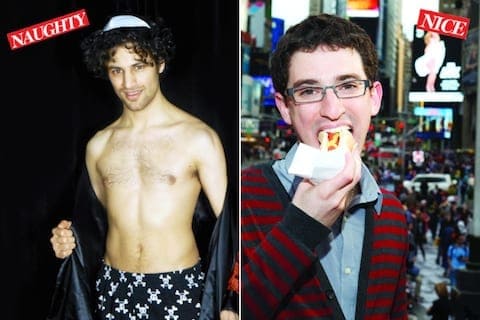 There are not one, but two Jewish male pin-up calendars available for purchase to fulfill your need for some kosher beef. First, there's Adam Cohen's "Nice Jewish Guys," which he started in 2011 and fills with pictures of charming, smiling, fully-clothed Jewish men, showing the sweeter side of God's chosen people. Then came Duncan Pflaster's "Naughty Jewish Boys" featuring young men, yarmulkes, and little else which Pflaster created to counter the "emasculating" stereotypes and discouraged outward sexuality of Jewish men and plans to release it this fall.

Despite the discrete tastes between the two calendars, Cohen felt that the name of Pflaster's calendar too closely resembled his own and had his lawyer issue a letter to Pflaster, requesting that he cease infringing on Cohen's trademark. Pflaster has countered that he doesn't think that consumers will be confused by the two calendars, calling the claim of trademark infringement "weak" and has no plans to stop making his calendar. Cohen has not commented further on the dispute, but his lawyer said that they consider the issue ongoing.