The Campaign for Southern Equality reports that for the first time, Mississippi has created the first known public record of a same-sex marriage in the state, via press release: 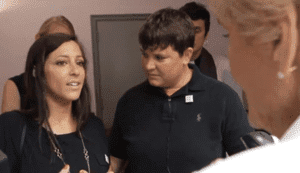 On March 24, Anna Guillot and Chrissy Kelly, a same-sex couple, paid $12 to record their legal marriage license at the Rankin County Chancery Clerk’s Office – the first known time that a gay couple has created a public record of their marriage in Mississippi. The couple, who live in Rankin County, were married in New York on July 13, 2012. Their marriage is recognized by the federal government and a growing number of states. However, Mississippi law refuses to recognize same-sex marriage; as a result married couples like Ms. Guillot and Ms. Kelly are regarded as legal strangers in their home state.“We’re just like anybody else. We love each other and we want to be treated the same as everyone else,” said Ms. Guillot. “We want people to know they are not alone. There are gay couples here in Rankin County,” added Ms. Kelly.Beginning in 2011, same-sex couples have recorded their legal marriage licenses in North Carolina and Alabama, as part of the Campaign for Southern Equality’s WE DO Campaign, a growing campaign that calls for full equality for LGBT people. “Couples like Anna and Chrissy are doing everything in their power to have their marriage recognized – including creating a public record of their marriage. Now no one can deny the reality of their marriage, their love or their commitment. We are calling for Mississippi to treat LGBT people equally under the law,” says Rev. Jasmine Beach-Ferrara, Executive Director of the Campaign for Southern Equality.

The WE DO Campaign plans to request marriage licenses this morning at the Hinds County Courthouse in Jackson, Mississippi as they did last summer in Poplarville, Gulfport, Hattiesburg, Jackson and Tupelo.