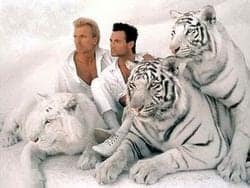 Montecore, the 380-pound white tiger responsible for a near-fatal injury to Roy Horn of Siegfried & Roy in 2003, has died, Las Vegas Review-Journal reports:

The white tiger was 17 and died “after a short illness,” according to a press release. Zoologists say 17 is within the lower-end parameter of a normal life expectancy for a tiger.

Horn, who was left partially paralyzed from the 2003 incident and forced to end his stage career, released a statement yesterday on the tiger’s passing.

“The world has lost one of its most majestic creatures and I have lost a brother. I will forever believe it was his concern for my safety and well-being that caused him to act as he did on that night long ago. We spent many hours together and he never failed to bring me great joy and wonderment. It was my great honor to be beside him at the end. He is now playing with his siblings in White Tiger heaven.”