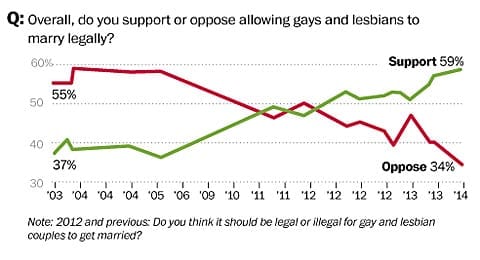 Half of all Americans believe that gay men and lesbians have a constitutional right to marry, according to a new Washington Post-ABC News poll in which a large majority also said businesses should not be able to deny serving gays for religious reasons.

Fifty percent say the U.S. Constitution's guarantee of equal protection gives gays the right to marry, while 41 percent say it does not.

Beyond the constitutional questions, a record-high 59 percent say they support same-sex marriage, while 34 percent are opposed, the widest margin tracked in Post-ABC polling.

The poll was conducted in the wake of a series of rulings by federal judges that state bans on same-sex marriage and prohibitions on recognizing marriages performed elsewhere are unconstitutional.

The poll also shows that by Americans oppose bills like the one in Arizona that would allow discrimination against gays based on religious beliefs. And their is strong support for gay adoption.