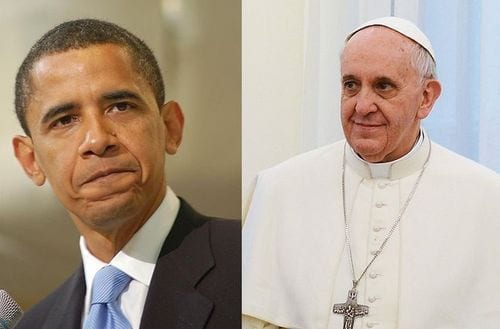 The Washington Blade is reporting that President Obama failed to raise LGBT-specific issues with Pope Francis during their meeting in the Vatican last Thursday.

“I would say that the largest bulk of the time was discussing two central concerns of his,” Obama told reporters after the meeting. “One is the issues of the poor, the marginalized, those without opportunity and growing inequality.”

Obama said he and the pontiff discussed immigration reform and the possibility of a papal trip to the U.S. The president stressed there was also “some specific focus” during their 50 minute meeting on the Middle East – and specifically Syria, Lebanon and the fledgling peace process between the Israelis and the Palestinians.

“The theme that stitched our conversation together was a belief that in politics and in life the quality of empathy, the ability to stand in somebody else’s shoes and to care for someone even if they don’t look like you or talk like you or share your philosophy – that that’s critical,” said Obama. “It’s the lack of empathy that makes it very easy for us to plunge into wars.”

Obama said he did not discuss any specific religious exemptions relating to the Affordable Care Act, although the Vatican noted that the two discussed “questions of particular relevance for the church in that country, such as the exercise of the rights to religious freedom, life and conscientious objection…”

Esteban Paulón, LGBT Federation of Argentina President, expressed disappointment that Obama failed to address global concerns about global LGBT inequality with Pope Francis. Before becoming the pope, Francis served as archbishop of Buenos Aires (where his record on gay rights was decidedly mixed)

“Even though we did not have high expectations, we believed that within the context of the meeting President Obama would have brought to the table his administration’s concern that it has expressed, and that we have shared, about the climate of hostilities towards lesbians, gays, bisexuals and transgender people in many parts of the world,” Paulón told the Blade on Friday. “In many of those countries this persecution happens with the support, or at the very least with the complicity and silence, of the Catholic hierarchy.”