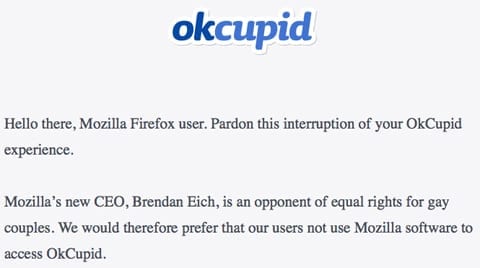 Over the past week we've been following the outrage over the news that newly-appointed Mozilla CEO Brendan Eich donated to California's anti-gay Proposition 8 campaign. Eich's donation was revealed by a pair of gay married developers who announced they were planning to boycott Mozilla's platform in protest. 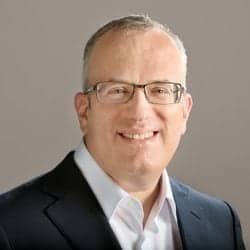 Following a rather lackluster statement from Eich in response to the controversy, several employees used Twitter to call on him to step down from his position.

Now the dating service OkCupid is blocking access to its site by users of Mozilla's Firefox browser and have posted this message to those who try to access the site on Firefox:

Hello there, Mozilla Firefox user. Pardon this interruption of your OkCupid experience.

Mozilla's new CEO, Brendan Eich, is an opponent of equal rights for gay couples. We would therefore prefer that our users not use Mozilla software to access OkCupid.

Politics is normally not the business of a website, and we all know there's a lot more wrong with the world than misguided CEOs. So you might wonder why we're asserting ourselves today. This is why: we've devoted the last ten years to bringing people—all people—together. If individuals like Mr. Eich had their way, then roughly 8% of the relationships we've worked so hard to bring about would be illegal. Equality for gay relationships is personally important to many of us here at OkCupid. But it's professionally important to the entire company. OkCupid is for creating love. Those who seek to deny love and instead enforce misery, shame, and frustration are our enemies, and we wish them nothing but failure.

If you want to keep using Firefox, the link at the bottom will take you through to the site.

However, we urge you to consider different software for accessing OkCupid:

OkCupid then provides links to other popular browsers.

On Saturday, Mozilla's blog posted a statement "to clarify Mozilla’s official support of equality and inclusion for LGBT people." Mozilla Foundation Executive Director Mark Surman posted about the controversy on his blogas did Mozilla's board chairwoman Mitchell Baker.

Meanwhile, the Wall Street Journal reports that three Mozilla board members resigned over Eich's appointment though Mozilla denied reports that Eich was the reason for the board members' departure in a statement to other media outlets.