This according to a recent BBC Radio poll: 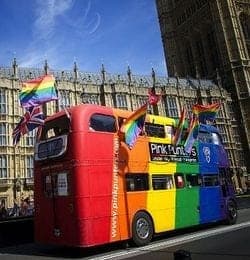 As legislation in England and Wales allowing gay couples to marry comes into force on Saturday, the BBC Radio 5 live survey also found men were nearly twice as likely to stay away as women.

The poll of 1,007 people found 68% agreed gay marriage should be permitted, with 26% opposing it.

A spokesman for lesbian, gay and bisexual charity Stonewall said it was important to highlight the fact that four in five people would accept an invitation to a gay wedding.

A further breakdown of the numbers showed that women and young people were far more likely to attend gay weddings:

Some 29% of men asked said they would not attend, compared with 16% of women.

The research also found that younger people were more likely to support same-sex marriage, with 80% of 18 to 34-year-olds backing it, compared with 44% of over-65s.

Of those polled, women were more likely to support gay marriage than men, with 75% of women for it compared with 61% of men in favour.

A majority of 59% of people asked agreed a person should not be considered homophobic for opposing the legislation permitting gay marriage.

You can review all of the results from the BBC poll, which surveyed over 1,000 people, here