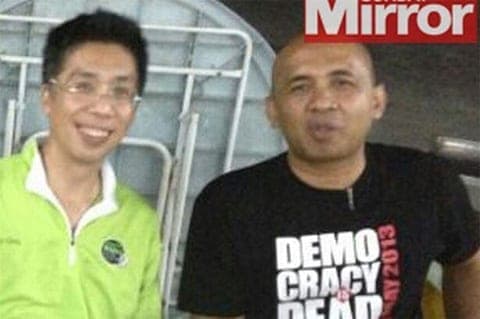 The tabloids are misinformed. You'd probably agree with the captain.

BANGKOK, Thailand — He’s “fanatical,” says one Western media outlet. He’s “obsessive,” says another. The captain of Malaysia Airlines’ missing jet was even photographed wearing a black T-shirt (above, right) that proclaims “Democracy is Dead,” which apparently “fuels talk that he hijacked the flight.”

These headlines create a composite image: an oddball radical with an Islamic name, a man possessed by fringe politics — all in a Muslim-majority nation unfamiliar to most in the West.

But these tabloid notions are grossly misinformed.

All evidence available to the public suggests the opposite: Capt. Zaharie Shah’s politics appear to be generally in tune with Western sensibilities. And given Malaysia’s authoritarian leanings, his opposition views are entirely understandable.

Malaysia is a tropical, multi-ethnic home to roughly 30 million people. The nation endured centuries of European colonization only to shake off British rule in 1957 and become, by Asian standards, modern and affluent. Thanks to a cultural mix of Malays, Chinese and Indians, its cuisine is also mind blowing.

The nation’s government, however, leaves much to be desired.

“People need to see that Malaysia is a one-party state, run by princelings, despite regular elections. This regime has been protected from effective competition,” said Wong Chin-Huat, a political scientist with Malaysia’s Penang Institute think tank.

"Once you understand that,” Chin-Huat said, “you’ll also understand why there’s chaos in coordination over the missing flight.”

Malaysia’s dominant party, Barisan Nasional, has held power for nearly 60 years. To retain control, Malaysia’s leaders stifle protest and dissent. They have instituted laws and privileges favoring the dominant race, Malay, over all other citizens.

The MH370 captain happens to be a committed Anwar supporter. The two are also very loosely related through in-laws but have no personal relationship, according to Singapore’s Straits Times newspaper. 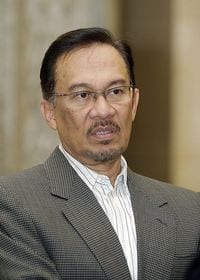 That prison sentence conveniently follows a groundbreaking election last summer in which the ruling party, badly threatened by Anwar’s opposition, earned less than half of the popular vote. Barisan Nasional retained power nonetheless.

“So if you think the captain is an extremist, then I’m afraid that 51 percent of Malaysians share that extremism. That’s how many people voted for the opposition party,” Chin-Huat said. “This situation generates anger, frustration and depression because it seems you can’t remove a government through elections. But the anger is understandable.”

“Him wearing a T-shirt that says ‘Democracy is Dead,’” Chin-Huat said, “is no different than Americans’ reaction in 2000 when Al Gore lost to George Bush.”

Tabloids’ screaming speculation that Zaharie hijacked the plane in “political protest” is hard to reconcile with the total lack — as far as we know — of a manifesto recovered by police on searches of his home and computer. Without a public declaration of intent, the killing of 239 people (plus himself and his co-pilot) would also be rendered completely pointless.

That hasn’t stopped Fox News from calling him an “obsessive follower” of anti-government politics, or its pundits claiming that “experts” believe his politics are a “cause of concern … is it a political or ideological act of protest?”

Zaharie, a highly competent English speaker, has a light presence on social media. His YouTube channel, featuring his mundane and geeky tutorials on home repair, has become a haven for both consolation and cruel trolling.

Zaharie also appears to have clicked “like” on a number of atheism-themed YouTube clips, which suggests a degree of unorthodox broadmindedness in Malaysia’s puritanical society. The state holds Islam so sacrosanct that citizens declared “Muslim” at birth are forbidden from legally switching faiths. 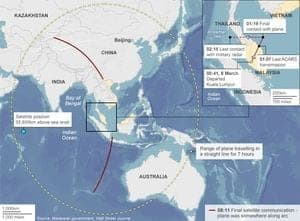 Multinational investigations into the bizarre vanishing of flight MH370 have grown more agonizing by the day. Satellite data indicate the Boeing 777 could have ended up as far as the Kazakhstan hinterlands or the depths of the Indian Ocean.

Malaysia’s premier has declared the plane’s disappearance “deliberate” and police have sharpened their focus onto Zaharie and his co-pilot. So far, authorities have not identified any others aboard the plane who appear capable of the expert navigation skills displayed after the jet veered off its scheduled Kuala Lumpur to Beijing route.

Investigating both pilots’ beliefs, mental state, behavior and belongings is necessary as long as 239 passengers and a 770,000-pound jet are missing. But so far, no publicly available evidence suggests Zaharie’s political beliefs were deranged or unhealthy.

Quite the opposite. The captain’s opposition to Malaysia’s flawed government — with its legacy of race-baiting, draconian laws and censorship — should be relatable to many Americans.

And if it turns out Zaharie’s politics somehow played a role in the flight’s disappearance?

Given everything we currently know, blaming Malaysia’s popular opposition would still be misplaced. That’s like blaming actress Jodie Foster for the 1981 attempted assassination of President Ronald Reagan — all because the mentally ill gunman wanted to impress her.