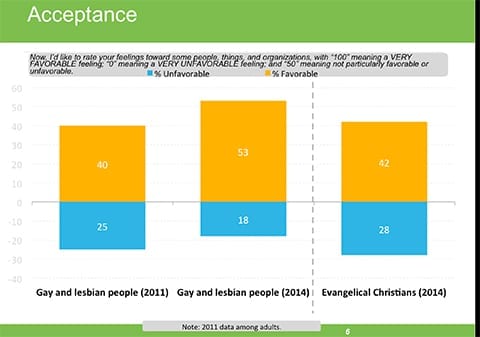 The survey of 1000 likely 2016 voters was conducted by Greenberg Quinlan Rosner Research and TargetPoint Consulting. Among the survey’s other main findings:

• There has been a huge shift toward social equality, with favorability ratings for “gay and lesbian” people increasing and the number of people who knows a gay or lesbian person  reaching 75 percent.  Even in football, the crucible of American culture, voters (79%-16%) judge a player by his ability, not his orientation.

• A 55 percent majority support marriage equality. While young people are at the vanguard of change, this survey also shows increased support among older voters, Catholics, non-college educated voters, and Republicans.

• Regardless of position on the issue, nearly 8 in 10 voters believe there will be less discrimination, it will be easier to grow up gay, and same-sex families would have more protection if marriage equality were legal in all 50 states.

A presentation of the poll's findings is available at the GQR site HERE.