In an open letter for the Human Rights Campaign, Oscar-winning actress and vocal LGBT ally Sally Field shared her experience raising a gay son, calling it “one of the great privileges of my life.” 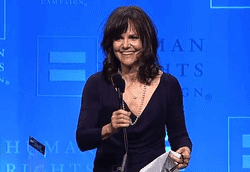 “The three things I’m most proud of in my life are my sons, Peter, Eli and Sam. They are kind, loving and productive people. Each with their own list of talents and accomplishments. Sam is my youngest son, by 18 years, and he’s gay. To that, I say: So what?

“Growing up, Sam wanted desperately to just be like his older brothers – athletic, rambunctious and even a little bit macho. He wanted to beat Eli at tennis, trounce Peter at computer football and learn everything about every basketball player on the court. But Sam was different. And his journey to allow himself to be what nature intended him to be was not an easy one.

“When I saw him struggling, I wanted to jump in. But his older brothers held me back. They told me I couldn’t travel that road for Sam. It was his to travel, not mine. I had to wait for him to own himself in his own time.

“I could make it easier only by standing visibly to the side, clearly loving him, always being there and always letting him know. Finally, at 20, long after he beat his brothers at tennis and computer games and knew as much as anyone about basketball, Sam was able to stand up proudly and say, ‘I am a gay man’.

Field’s letter is part of a new fundraising campaign by the HRC to help prevent the introduction of laws similar to those brought up in Arizona and Kansas that would allow religious-based discrimination against gays.

“There are people out there – organizations and politicians, strangers who have never even met Sam – who would rather devote themselves to denying his happiness.

“Why would anyone want to prevent my son—or anyone’s son or daughter—from having basic legal safeguards like family medical leave, Social Security survivors benefits, or health insurance? It doesn’t make any sense—but it won’t change until people speak out.