NYC's historic Stonewall Inn plans to dump Guinness Beer and ban sales of it beginning tomorrow, on St. Patrick's Day, over its refusal to drop sponsorship of the St. Patrick's Day parade, which bars gay people from marching, GLAAD reports. 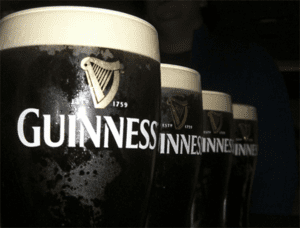 Pieces Bar and Hardware Bar in NYC have also told GLAAD they will not carry Guinness and GLAAD is continuing outreach to increase the boycott by adding other venues.

Irish Queers will be holding a press conference during this year's parade on Monday 3/17 at 10:30am ET on Fifth Avenue between 56th and 57th regarding the parade.

“The homophobic bigotry of this parade is reaffirmed each year by the organizers," said JF Mulligan of Irish Queers, in a press release. "The NYPD’s insistence on sending huge uniformed contingents every year makes it clear that the rights of our communities don’t concern them. Commissioner Bratton hasn’t even acknowledged the community’s outrage. If the NYPD and the City refuses to uphold their own anti-bias rules, how can we trust police officers with our safety?”

Then, at 1 pm on Monday, the group will gather with GLAAD and community activists at the Stonewall Inn at which time Guinness products are to be removed from the bar.

Ford Motor Company is another corporate entity which has chosen to stand by its sponsorship of the anti-gay parade.