Tyson noted that the first episode of COSMOS was broadcast on 9 different U.S. channels, 180 countries and in 45 different languages and even introduced by President Obama himself.  This, along with the fact that Tyson has over 1.7 million Twitter followers, indicates to him that there is a renewed hunger out their for science and discovery. 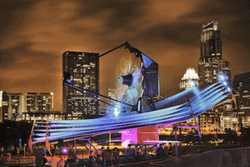 Other panels tapped into this new wave of scientific interest by showing off some of the fascinating work that NASA is doing to find extrasolar planets and extraterrestrial life. The James Webb Telescope, a model of which was on display here at SXSW, is set to launch in 2018 and will give us a clearer picture of just how many Earth-like planets there are in our galaxy. Another panel featuring a live Q&A with astronauts aboard the International Space Station gave audiences insight into what its like to sleep in space and have to convert urine and sweat into drinking water.

NASA’s Asteroid Data Hunter challenge was also announced at SXSW, which asks developers and coders to compete in the development of algorithms that would help identify potentially hazardous asteroids in images from ground-based telescopes. NASA executives said they are launching this initiative, in part, because we still don’t know the location of 3-4% of the asteroids that fall under the “civilization-destroying” size category.

As Neil deGrasse Tyson mentioned in his keynote, the dinosaurs certainly would have developed a space program to defend against asteroid impacts if they could have. Failing to pursue such a program when we have the scientific and technological capabilities now, Tyson declared, would make humans the “laughing stock” of all the intelligent species in the galaxy if the worst case scenario should happen: “They’d have human bones on display in their museum. ‘Here they are, not building a spaceship.”