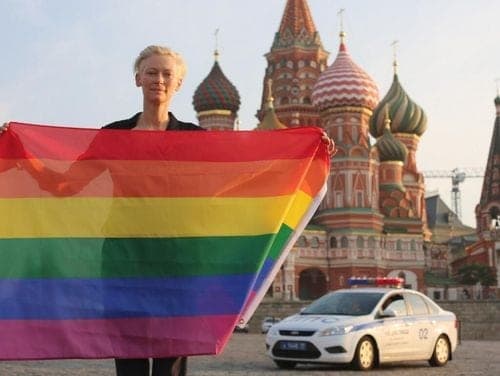 Tilda Swinton, who showed solidarity with the gay community last July by standing in Red Square with a rainbow flag, is asked about that moment in a SXSW interview with The Daily Beast.

"Well, Russia has the gayest president ever. No, that’s an offensive thing to say—not to him, but to the gay community."

Swinton has some additional insights about gay people:

"Well, I think there’s something that gay people have. It is true that to pass through the transitions that gay people have to in order to come out to themselves, to their families when they’re quite young, it’s a grow-bag, isn’t it? And I think that very often, heterosexual people miss out on that. There’s a feeling of development and sometimes, heterosexual people have never had to go through that self-examination and just knowing themselves, and that sense of coming out, coming to your own defense, and being your own best advocate, and going, “No! I’m going to stand by myself and say this is who I am and you can all fuck off.” That is a wonderful transition to go through, and I suppose a lot of straight people miss out on that, and then maybe their relationship choices are potentially less examined. They could be lazier or less thoroughly thought-through."