Slowly but steadily Truvada as PrEP is gaining awareness and acceptance as a valid method for preventing HIV transmission. The drug's reputation is not without its problems, however, including no small number of myths and misinformation that routinely have to be debunked. Adding to the opposition of the drug's uptake is AIDS Healthcare Foundation President Michael Weinstein.

Said Weinstein of the drug: 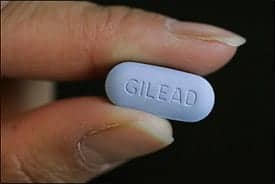 If something comes along that's better than condoms, I'm all for it, but Truvada is not that. Let's be honest: It's a party drug.

Weinstein received immediate public backlash and condemnation for the remarks.

I speak out against Weinstein's ignorant form of speech that is attacking our LGBT community and those that are aware[…]He disgraces those that are actively seeking protection, awareness and knowledge by literally calling them drug addicts.

The facts are that Truvada is estimated to be over 99% effective when taken properly. Additionally, the fear that Truvada will encourage riskier behavior is not founded in fact; men are already having condomless sex regardless of the availability of PrEP, and during the iPrEX studies prior to FDA approval there was no increase in risky behavior between the men who thought they were on PrEP versus those who thought they were on the placebo.