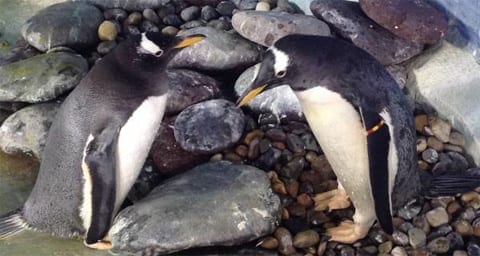 Ireland's Dingle Oceanworld says that a pair of gay penguins have reportedly revealed themselves by setting up a nest together, the Irish Examiner reports:

The Irish duo are one of five couples which have paired off for the breeding season at the polar exhibition which mimics the icy conditions at the South Pole in the Kerry Aquarium.

The head penguin keeper, Kate Hall, said same-sex couples are not unheard of in the penguin world, although it is usually two males who pair off.

"It’s definitely not an unusual occurrence although this time it’s two females."

She said Missy and Penelope have been displaying all the signs of a courting couple in their enclosure, which is home to a dozen of the black and white creatures.

"The thing penguins do to show they like each other is they bow to each other and they are doing that.

Here on Towleroad we've followed many gay penguin pairs over the years, including Suki and Chupchikoni at Israel's Ramat Gan Zoological Center, Buddy and Pedro at the Toronto Zoo, Harry and Pepper at the SF zoo, Z and Vielpunkt at the Bremerhaven Zoo in Germany, two great parents at a Chinese zoo, and of course NY's Silo and Roy, who were immortalized in the controversial children's book, And Tango Makes Three.