Attorney Charles Cooper, who argued for 'Protect Marriage in the Proposition 8 case, says he learned during the trial that his daughter is gay and he's now helping plan her wedding, the AP reports: 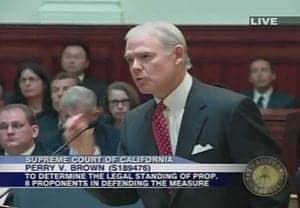 Attorney Charles Cooper says his view of same-sex marriage is evolving after having argued in court that gay unions could undermine marriages between a man and a woman.

The revelation is an unexpected footnote in the years-long debate over Proposition 8, the California measure struck down by the Supreme Court last year. It is also offers a glimpse, through the eyes of one family, of the country's rapidly shifting opinions of gay marriage, with most public polls now showing majorities in favour of allowing the unions.

"My views evolve on issues of this kind the same way as other people's do, and how I view this down the road may not be the way I view it now, or how I viewed it ten years ago," Cooper said in journalist Jo Becker's book "Forcing the Spring: Inside the Fight for Marriage Equality."

In a statement to The Associated Press, Cooper said his family "is typical of families all across America."
"My daughter Ashley's path in life has led her to happiness with a lovely young woman named Casey, and our family and Casey's family are looking forward to celebrating their marriage in just a few weeks," he said.

Previous Post: « Jake Gyllenhaal Shows Off Boxer’s Body: PHOTO
Next Post: The OXD Mirror: Róisín Murphy’s Shows Off Her Italian Side and More »