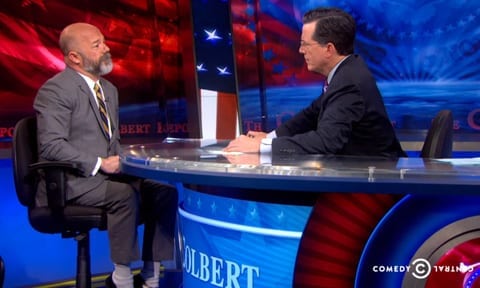 Andrew Sullivan brought his argument that Brendan Eich was brought down by the 'gaystapo' (as like-minded conservatives would dub the imaginary group of gay activists conjured in this tale), to the Colbert Report last night where he was given carte blanche to discuss the episode. 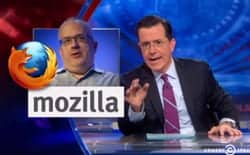 Watch the segments below.

A few notes of response to what Sullivan says since Colbert did not offer much.

Gay activists did not get Eich fired. As our Ari Ezra Waldman explains in his piece earlier this week, gay groups were not in this fight – Eich was brought down because he took actions that made him unfit to lead a unique community like Mozilla:

There was no mainstream gay rights organization calling for his head. No one "bullied" Mr. Eich out of Mozilla's headquarters. To say so is an insult to those of us who have been bullied in real life. And no cabal of intolerant gays proclaimed that disagreement with us merits unemployment. That seems to be a bogeyman conjured up in the prolific brain of Andrew Sullivan.

Eich was not being punished for a belief, as Sullivan says. He resigned after it was revealed he took financial action to specifically harm others (the Prop 8 donation) and made it worse by refusing to discuss his actions. It was not a group of gay activists out to "scalp" him as Sullivan would say, for a belief.

Sullivan says "where I draw the line is when we start targeting individuals for punishment or calling them heretics, or bigots, or haters without giving them a chance to really explain themselves."

But Sullivan did just that a few weeks ago when MSNBC was considering cutting Alec Baldwin for using an anti-gay slur. Michelangelo Signorile noted:

"…this is the same Andrew Sullivan who was first out of the gate with the pitchfork, driving Alec Baldwin off of MSNBC — as Baldwin bombastically charged that he was the victim of Sullivan and his "fundamentalist wing of gay advocacy." …

"But if you're going to get worked up over a guy hurling the word "c–ksucker" in the heat of the moment — while he also gave money and support to the causes of LGBT rights and marriage equality — you should be completely outraged by a man unapologetically giving money to a hate campaign that helped pass Prop 8 by demonizing gay men and lesbians in television ads charging that gays are dangerous to children. The damage done by those ads is incalculable, turning neighbors in California against one another, empowering anti-gay bullies in schools as well as the bashers on the streets."

Sullivan also brings up the talking point about Obama having the same views as Eich. Jeremy Hooper refuted that point well earlier in the discussion about Eich, writing:

…look, President Obama was certainly wrong on marriage, something he himself now realizes…But the fact of the matter is that the Democratic candidates (and most Dems in general) opposed the abject and unconstitutional nastiness that was and is Proposition 8 because, even when they had yet to come to their current places of support, they knew that altering governing documents for the sole purpose of limiting rights was a bad idea. Mr. Eich apparently felt otherwise.

Watch the segments below:

And here's Sullivan arguing the complete opposite in a discussion with Anderson Cooper about why Alec Baldwin should lose his job because of his anti-gay slurs: