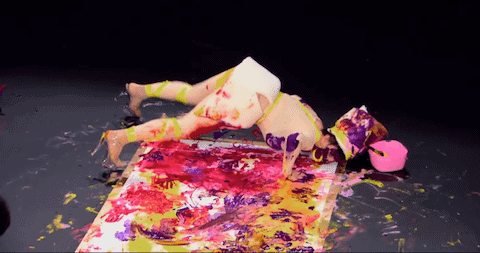 Before we dove into wedding planning, tonight's mini-challenge celebrated marriage equality by creating "twerks of art." The ladies covered their bodies in paint and then rolled all over a giant canvas. It was strange. After that, the ladies thought they were going to be paired with biologically female brides for the main challenge, only for it to be revealed that they'd actually be giving the menfolk a drag makeover. Turns out, some of these queens could give Vera Wang a run for her money. Neil Patrick Harris and David Burtka joined the panel to judge the final six. 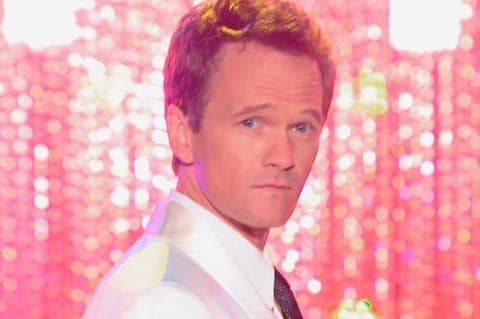 Here are this week's rankings:

1. Tonight was a clean sweep for Bianca Del Rio. First, she took the nonsensical mini-challenge (possibly the most meaningless challenge in recent memory), and then her bride was the heads and veils above the rest. The resemblance was strong, the dress was well-executed and Bianca still snuck some of her trademark barbs into the runway. ("Don't call me mommy in public.") She lucked out being paired with such a cooperative (and pretty) groom, but Bianca's clearly a pro, and I think she might be unstoppable.

2. After a short slump, BenDeLaCreme is back on track and on the path to the finals. The mother-of-the-bride look was on-point without being too matronly. (I also loved the unique walk.) She and Bianca are the yin and yang of the competition — she's "terminally delightful" and Bianca's charmingly caustic. I don't care if the crown goes to the good witch or the bad witch, as long as one of these two is named this season's next drag superstar.

3. Once again, I find Courtney to be just OK. (Her Southern belle bride was more South Carolina than Louisiana, was it not?) When I'm not bored by her, she comes off sort of shrill (not a great thing for a singer). She seems likely to take that third spot, unless Adore's underdog narrative is fully realized and she surges from behind.

4. Speaking of Adore, boy, this was not her week. She can't sew; we know this already. Her bride-daughter was a horrible mess, yes, but it was an expected horrible mess. Still, I just can't help but root for her. And, to be completely honest, I'd much sooner pay to see an Adore Delano show than Darienne or Joslyn. 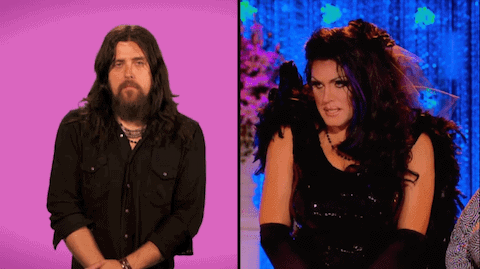 5. In all fairness to Darienne, I think she achieved the greatest transformation with her groom. When you look at the two of them side-by-side (above), it's striking. Darienne's look though? Yawn. NPH called it cocktail, but I think it looked a little Wal-Mart. We're at the end of the line now, and I don't think Darienne has the star power to make it beyond next week. It'll take a real catastrophe from one of the top four girls to keep Darienne around.

6. We righted last week's wrong and sent Joslyn Fox home. She had a rough go this week with a very uncomfortable groom. Poor guy couldn't even get through the runway without puking. (And no one even mentioned meaty tucks!) Though her look was slightly better than Adore's, her lip sync definitely was not. It was beyond time for this Fox to head home. Oh, Joslyn, you sweet, sweet idiot, you were somehow better and worse than everyone thought.