The American Family Association is instructing its members to send back all the mail they receive that comes bearing a Harvey Milk stamp, in a comical pearl-clutching alert: 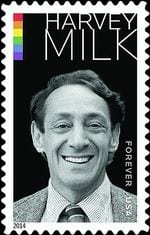 The Harvey Milk stamp was a result of seven years of lobbying by a self-described drag queen (a biological man with implanted breasts) and former transsexual prostitute Nicole Murray Ramirez of San Diego.

Honoring predator Harvey Milk on a U.S. postage stamp is disturbing to say the least. Harvey Milk was a very disreputable man and used his charm and power to prey on young boys with emotional problems and drug addiction. He is the last person we should be featuring on a stamp.

Unfortunately, the deed is done. The United States Postal Service honored a child predator at the whim of a drag queen.

Furthermore, the radical homosexual lobby will undoubtedly encourage businesses to use these stamps – all in the name of inclusiveness, political correctness and diversity. This is not diversity; this is perversity.

What you can do…

1. Refuse to accept the Harvey Milk stamp if offered by your local post office. Instead, ask for a stamp of the United States flag.

2. Refuse to accept mail at your home or business if it is postmarked with the Harvey Milk stamp. Simply write 'Return to Sender" on the envelope and tell your postman you won't accept it.